The end of the FIFA World Cup and Germany emerged victorious, as many predicted. What a tournament it was, though: apart from the games themselves and the high scorecount, we had the return of Chewy Luis, comedic pratfalls (then less so), meme-worthy goalkeeping, Arjen Robben’s extended audition for the NL men’s diving team, tabloid tomfoolery, SLOTH KONG, the shame of a nation.

Plus, Die Mannschaft has Özil. I can’t be the only one who sees it …

Well, in honour of Die Mannschaft‘s victory, let’s go to Germany this week.

From legendary director Ernst Lubitsch comes a truly wonderful absurdist comedy: Die Puppe (The Doll). Die Puppe is the story of Lancelot, a man who, as the sole family heir, is under pressure from his uncle to marry.  However, the idea of matrimony puzzles and disturbs him:

After he escapes a pack of would-be brides who have chased him through the streets, he takes refuge with an abomination* of monks in dire financial straits who hear about his predicament, learn of his inheritance, and propose a plan:

*believe it or not, this is the collective noun for monks! 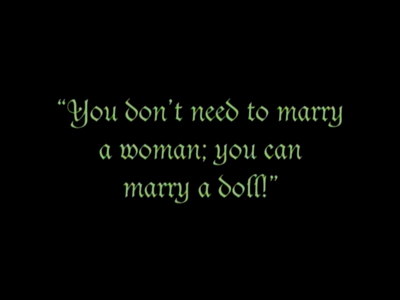 You see, the town features a talented doll-maker called Hilarius, expert in creating human-like dolls that can walk and dance by the power of a windup mechanism.  Lancelot goes to his studio, but the sheer feminine presence of Hilarius’ display of 1910s Real Dolls is rather too much for his nervous disposition.

However, there is one doll that is of appropriately good character for Lancelot: the one modelled on the dollmaker’s daughter, Ossi (played by the vibrant Ossi Oswalda, who also played lead roles in Ich möchte kein Mann sein, 1918; and Die Austernprinzessin, released later in 1919).

Plot twist!  Hilarius’ apprentice accidentally breaks the arm of the Ossi-doll just before Lancelot is to depart with his fiancée.  To cover for him, the real Ossi has to pretend to be Lancelot’s doll bride-to-be.  Cue a series of scenes where Ossi acts or reacts, only to have to quickly revert to her blank, stiff-armed doll pose:

Oswalda is a lot of fun – she’s very animated and her style works well with Lubitsch’s oddball approach.

We also get to see her to a great pseudo-robot-dance, by virtue of her having to hold her arms at the doll’s fixed position of 90 degrees.

We’re functioning automatic / And we are dancing mechanic

It’s excellent!  Lubitsch is in fine form. Die Puppe is quite ridiculous, and intentionally so. The farcical plot and humour is balanced really well with a deliberate absurdity of character and setting. Something I really love about Lubitsch’s early films is their anarchism; there’s a brilliantly surreal energy to his pictures in this era.  Even when the humour is played broadly, it is always just a little strange or off-kilter; for example, here, in an already bizarre scene, the dollmaker’s apprentice is going mental and smashing up the kitchen – but look at the set! Utensils painted to the wall cartoon-style.

In another absurdist detail, the horse that draws the carriage is clearly made out of people (made even more obvious in closer shots), even though Lubitsch could certainly have hired an actual horse had he chose to.

The premise of the film obviously rests on male fears about women, so there’s also a nice touch of self-awareness to this intertitle: 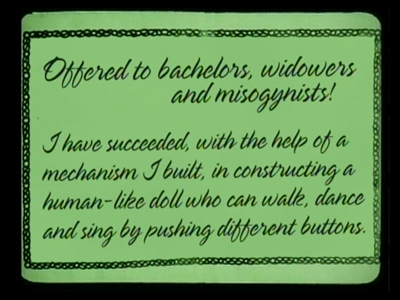 Offered to bachelors, widowers and misogynists!

Hilarius the doll-maker, suffering the trauma of the disappearance of his daughter Ossi.

The humour and the plot work well, but much appreciation must be given to the aesthetics of Die Puppe, which features some wonderful cartoon-Deco sets. 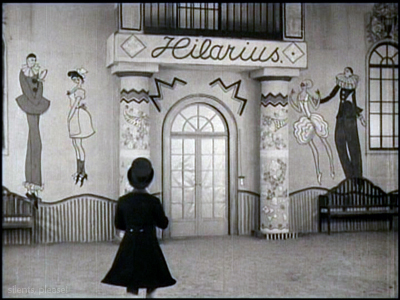 Consider also this experimental shot, which was presumably done in-camera as a series of masked exposures:

Die Puppe foreshadows many of the elements Lubitsch would develop further in future films: the experimental vignettes and decorative sets of Die Bergkatze (1921), the stylized sets of Die Austernprinzessin (1919) and the outlandishness of Sumurun (1920), even if it’s not as spectacular as the latter.  However, in terms of cohesion and pacing, it might just be better than them.

The Filmportal DE has transcribed an amusing contemporary review published in the Film-Kurier (Berlin) on 03 February 1920.  The Film-Kurier author relates how the film was received with unanimous appreciation in Berlin, but reprints the outraged words of a Catholic commentator from Aachen who objected to the portrayal of the monks, labelling Die Puppe a ‘Schandwerk’ (shameful work):

The plot of this concoction, which proves to be exemplary of the sorry state of today’s cinema-art, is nothing more than a shameless mockery of Catholic religious life.

It seems crazy to think that the Catholic Church could be stuffy and out of touch with public opinion, but there you have it.  The rest of Germany enjoyed Die Puppe, and Lubitsch’s star continued to rise.

Addendum: A friend on Facebook drew my attention to Maison Fifi: Lustspiel aus einer kleinen Garnison (DE 1914; Maison Fifi: A Comedy of a Small Garrison), a film with a similar plot that screened in Bologna this year. Possible inspiration for Lubitsch? Maison Fifi is available to watch here on the European Film Gateway.

This entry was posted in Film and tagged cinema of 1919, cinema of Germany, dangerous female sexuality, Ernst Lubitsch, excellent women, my kind of comedy, Ossi Oswalda. Bookmark the permalink.