Posted on 13 October 2014 by silentsplease

(Previously: preview, recap 1, recap 2). This is a rather sketchy recap, as I’m still in the post-festival faze of another wonderful Giornate! But here we go:

Returning to Thursday afternoon – the programme on early French cinema was wonderful. The colour Méliès material was beautiful, and I liked the Paul Nadar films perhaps even more. Some of the latter were restored from paper prints, and I would like to know more about that material – the creases of the paper were quite visible in the image, lending it a very interesting visual quality, and from the crease patterns they didn’t necessarily look like contact prints from 35mm. I could be wrong about that, though. There was one very strange presentation choice made with the Nadar films: several of them were extremely short, just two or three seconds, so they were played several times. Yet instead of playing them on a loop, they were played in forward motion and then in reverse, something I found quite disconcerting. Still, just incredible to see this material from almost 120 years ago. 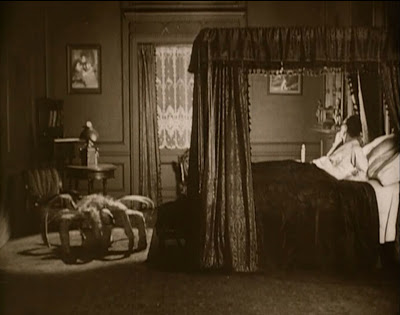 The late Thursday and early Friday screenings were both from the ‘Russian Laughter’ programme, and both were excellent. Дон Диего и Пелагея | Don Diego and Pelageya (USSR 1928) was a bureaucratic farce turned Komsomol promotion film, with a great turn from the leading actress Maria Blumenthal-Tamarina. She had previously acted on the stage and screen, but on the basis of this film and Его призыв | His Call (USSR 1925), she became a star in her late 60s. Well-deserved, in my opinion! It was really Pelageya’s film, not Don Diego’s. The next morning, Чины и люди | Ranks and People (USSR 1929) was another unexpected delight: an anthology of three Chekhov stories, each with great direction and pacing, acted by members of the Moscow Art Theatre. Ivan Moskvin was particularly fine as the obsessively repentant accidental sneezer Chervyakov in Смерть чиновника | The Death of a Government Clerk.

A couple of shorts in the last Technicolour programme stood out to me. Who could resist Clara Bow throwing a fish to a pelican in the surviving fragments of Red Hair (US 1928)? Likewise, the dance film A Josephine McLean Dance Classic (US 1929) was a true pleasure, featuring several dance routines shot on an Art Nouveau stage, including ballet, modern dance, a vaguely East Asian-inspired number, and a group routine with compositions reminiscent of Henri Matisse’s La Dance (FR 1910). 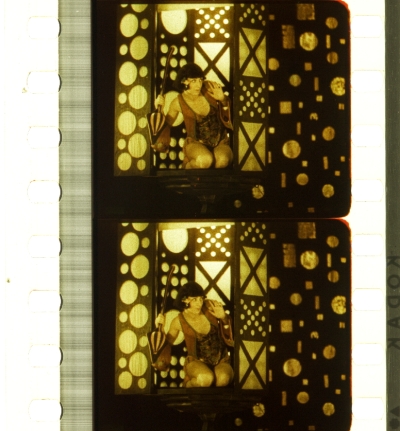 Perhaps the most interesting for me were the printing tests for musical Sally (US 1929). These tests had a lot of exposure changes, some double exposures, and for some shots the red and green matrices appeared to be printed out of register by several frames. It’s the kind of ephemeral material that I really enjoy. Incidentally, the shoot for this film sounds like a nightmare – 8,100,000 watts (!) were needed to light the largest stage, leading to makeup literally melting off the actors’ faces. Technicolour always had high lighting demands due to its optics (all the beam splitting prisms, filters, etc), and especially earlier on, the films were very slow: the equivalent of a single-digit ISO rating.

And the finale screening of City Lights (US 1931), was, of course, beautiful. As for the afterparty, that was great fun too – but that’s another story …

I have a bright red ‘do at the moment. Watch out world …

The opening two intertitles of The Star of the Side Show (US 1912):

The peasants regret that their only daughter is a midget.

She refuses to marry a neighbouring midget.