Fatal passions: an overview of the Italian divas

Posted on 7 December 2014 by silentsplease

Decadence, outrageous emotion, an extravaganze of costume and gesture … the inimitable screen presence of the Italian divas is one of my favourite facets of the silent era. In the 1910s, actresses like Lyda Borelli, Francesca Bertini, and Pina Menichelli swept across the cinema screen, their joys and agonies rendered with grandeur, sensuality and extraordinary style.

I was instantly drawn to these so-called ‘diva films’ when I learned about them, which was probably from Peter Delpeut’s compilation-film tribute Diva Dolorosa (NL 1999). What may be vices to some are virtues to me: I love the often operatic nature of the acting, the fanciful and sometimes bizarre costuming, the sensational plots. And most importantly, women are placed at the heart of the storyline: the divas are front and centre, entrusted and chosen to carry the film.

These are generally not unheralded feminist works: the diva is usually more mater dolorosa than independent woman (or even femme fatale or vamp). But there is something special about these films: the woman at the eye of the storm, the outsized emotion, the expressiveness of body, clothing, and décor.  Mariann Lewinsky may have put it best in the liner notes of the Sangue Bleu DVD: “It is a wonderful genre: the films are as gorgeous as birds of paradise, with plots that have no use whatsoever for probability.” Although the diva’s character can cross social classes, the films generally focus on high society or aspirational settings; even situations of ruin or poverty are pervaded with a certain sense of glamour.

It was the flowering of something different, enabled by the rise of film as a mass medium; the modern social context; the increasing urbanization of life. As Michele Canosa writes (again in the Sangue Bleu DVD liner notes), “A diva does not arise from the sea foam, but is shot out of the bustling metropolis.” She continues:

The concept was new to the screen: a thorny drama—modern—feature length—with a female star. [..] Now the costumes and circus of ancient Rome competed with modern settings, fine tailoring, and toilettes à la page. This high-society version of a “Made in Italy” genre became better known by the term, which later became antiquated, cinema in frac (tux films)—“in heels and tuxes”.

Yet as argued by Angela Dalle Vacche, these films were not just empty spectacles: they also had social relevance, tackling issues such as divorce, shame, abandonment, illegitimate childbearing – important in a strongly Catholic country that trailed other Western European nations in women’s rights issues. In her words, “Thanks to its social awareness, cinema strengthened its bond with female audiences to an outstanding degree”.  Interestingly, it seems the popularity of the genre is connected to the very language used for film in Italian: according to Dalle Vacche, it was with the emergence of the diva film that the linguistic shift from il cinematografo to a feminine noun (la film; la pellicola) occurred.

Who were the divas?

In the WWI era – the heyday of the Italian film diva – Lyda Borelli, Pina Menichelli, and Francesca Bertini were the most famous Italian actresses to grace the screen: all beautiful and talented, each bringing something different to the cinema.

Although not the first of the three women to enter films, Lyda Borelli is generally considered to be the first film diva, and continues to be marketed as such (e.g., Lyda prima diva! by the Cineteca di Bologna). Borelli was a well-established stage actress who launched her film career in 1913 with Ma l’amor mio non muore! | Love Everlasting (lit. But my love will never die!) Being of the stage, Borelli’s cinematic acting was very influenced by theatrical conventions: she acts with a unique, flowing, decadent style which delighted her many fans and gave rise to the verb borelleggiare, i.e. “to Borelli-ize” or imitate Borelli—the 1917 edition of the Dizionario Moderno explains the term as “Young women fussing and moping around, in the manner of the beautiful Lyda Borelli’s gratuitous and aestheticizing poses”. Characterized by poses and dancelike movements based on painterly figures, it is an acting style that is out of fashion now, but breathtaking, and much appreciated in her time. Francesco Pitassio quotes an anonymous reviewer of the early 1910s:

Lyda Borelli is the actress who epitomizes grace and elegance; her movements on the scene, which appear to have been forged by an artist expert in decorations and plastic effects, […] the flexible body of the diva Lyda is something evanescent and dream-like.

Ma l’amor mio non muore is essential viewing, as is one of my all-time favourites, Rapsodia Satanica (1917); Fior de male (1915) and Malombra (1917) are both wonderful too. Like all of the divas, there is little available on DVD, but digital copies for several of her films are out there. So far, I’ve covered the following:

Both skilled actress and glamorous movie star, Francesca Bertini was the queen of Italian movies in the teens, gaining more mentions in the movie press than any other actress. It is fair to say that Bertini is the diva actress with the most range: she took on a wider variety of roles than Borelli and Menichelli, and is generally (and rightfully) credited with a more realistic acting style. Often contrasted with Borelli, Bertini’s style is characterised by a more naturalistic and economic approach; Bertini herself was influenced heavily by Asta Nielsen. In 1914, a critic wrote:

Francesca Bertini does not pursue and unrealistic ideal through an artificial deployment of poses; instead she conveys reality through spontaneous facial expressions and natural gestures. […] She is not a model who strikes a sculpture-like pose, she is, rather, a woman of the real world.

Bertini took a very active role in her career, shaping her image and choosing her roles carefully, as well as founding her own production company, Bertini-Film. A prolific film actor since the turn of the 1910s, her breakout year came in 1914 with the release of L’histoire d’un pierrot, in which Bertini was the first Italian film actress to play a role in male clothing, and Sangue Bleu | Blue Blood (1914), released on DVD this year as part of Cineteca di Bologna’s Cento anni fa (one hundred years ago) series. The next year saw another great critical and popular success, Assunta Spina, arguably her best-known role. Bertini also played classic roles such as Marguerite Gauthier (La signora delle camelie, 1915) and Floria Tosca (La Tosca, 1918); after the Italian film industry tanked in the 1920s, she sought work in France and Germany. I have covered several of her films:

This brings us to Pina Menichelli, perhaps my personal favourite of the big three. Possessed of a striking face, charismatic sensuality, and an idiosyncratic approach to gesture and movement, Menichelli has a truly fascinating screen presence. She doesn’t have such an easy characterisation as Borelli or Bertini, but Dalle Vacche describes her as the most defiant of the divas, which seems fitting – not quite mischievous, but sharper and less regal than Borelli, with an almost feral edge to her darting movements. Starting out with Cines, it was her move to Itala that led to her breakout, with the film Il fuoco | The Flame (1915), directed by the venerable Giovanni Pastrone. Other key Pina films include Tigre Reale (1916) and La Storia di Una Donna | The Story of a Woman (1920). See these entries:

Aside from the Holy Trinity, the list of cinema divas usually includes women such as Elena Makowska, Hesperia, Leda Gys, Elena Sangro, Soava Gallone, Diana Karenne, Italia Almirante Manzini, and Mercedes Brignone. Rina di Liguoro, too, if we move forward in time a bit. These women all have relatively distinct types, which really deserve elaboration in a further article; I’ll note here that I have particular affection for Soava Gallone (so good in Maman Poupée, an impressive film in its own right) and Italia Almirante Manzini, with her assured presence and slightly knowing smile. Diana Karenne, who also directed, was considered the most cerebral actress of her time; it’s a huge shame that so little of her filmography survives. The appealing Leda Gys was very successful right through the 1920s, often playing more of a girl-next-door type than did her peers. Unfortunately, few of her films are readily available for viewing.

I should also mention Maria Jacobini (1910s & 1920s) and Carmen Boni (1920s), two other prominent Italian actresses of the silent era. I consider both more actress than diva, and indeed neither is commonly tagged with the ‘diva’ label. They are both excellent. 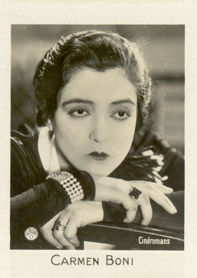 Here are the other divas that I’ve covered to date:

The main person to have written about diva films in English is scholar Angela Dalle Vacche, who has published the book Diva: Defiance and Passion in Early Italian Cinema (2008) as well as a series of papers on the topic. I find her analysis sometimes peculiar, but there’s no doubt that she’s done a large amount of research and has published information unavailable elsewhere. In Italian, a key text is Cristina Jandelli’s Le dive italiane del cinema muto (2006).

Diva films are often far from flawless, yet they reveal many delights. They are frequently beautiful – as well as the costume and mise en scène, one can find some wonderful examples of staging and even editing – but on the other hand, the plots are not always distinguished. After several years, I still haven’t exhausted my fascination with this genre. In the end, what attracts me to the diva film is the central figure of the diva herself – her phenomenal screen presence and movement, her dresses, her struggles, triumphs and sufferings. The figure of the excessive woman, writ large on film in 1910s Italy.

13 Responses to Fatal passions: an overview of the Italian divas