Death, love, and beauty: Lyda Borelli in Rapsodia Satanica (IT 1917)

Posted on 13 December 2014 by silentsplease

Lyda Borelli is the star of this update of the Faust legend. La diva Lyda plays Contessa Alba d’Oltrevita, who at the beginning of the picture is an elderly woman, looking on jealously at the youthful beauty that surrounds her. When Mephisto appears with a bargain for her – her youth and good looks restored, with the proviso that she cannot fall in love – it takes little for her to be persuaded.

Mephisto takes her by surprise, but she agrees to the bargain, and throws down his hourglass to seal the deal.

Alba preening, delighted at the return of her beauty.

She heads to the local festival, full of flowers, people, dancing, and music; men flock to her.

It’s there that she meets brothers Sergio and Tristano. It’s Tristano she likes, but Sergio falls for her, quickly and hard; she simply scoffs at him, too busy enjoying herself. There is a letter: “I’ll wait for you under your window. If I don’t see you before midnight… I will die in front of your house.” Tristano goes to her and entreaties her to stop Sergio, but she is too caught up in herself and in Tristano: Sergio shoots himself.

From there to a series of scenes where we watch Lyda thinking, hoping, and dreaming in the dance-like mannerisms so particular to her. Clothing plays a large role: Borelli continually uses it to emphasizes the movement of her body, dressed throughout the film in the Fortuny and Poiret gowns that she favoured, replete with floating silk wraps and draped veils: very reminiscent of the Loïe Fuller’s famous serpentine dance. 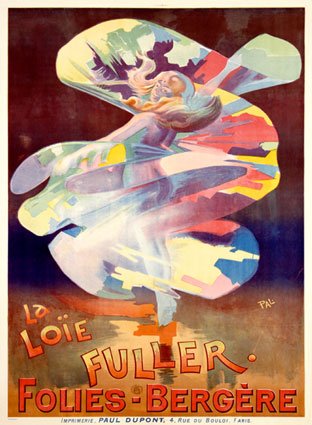 Watching the visual richness of the costuming and staging in Rapsodia Satanica (not to mention the striking and lavish the use of colour) brings to mind Tom Gunning’s influential model of the ‘cinema of attractions’: the idea that early cinema was more about aesthetic impressions, spectacle, and visual attractions than telling a coherent story. As a corollary, the framework for making, understanding, and receiving these films was different than what we expect now, after many decades of narrative-driven cinema. Gunning was talking about an earlier period than that of Rapsodia Satanica, but then again, narrative cinema, and all its hallmarks that we take for granted today (goals, structures, editing techniques) was still being refined and institutionalized in the teens. And as he writes, “the cinema of attractions does not disappear with the dominance of narrative, but rather goes underground, both into certain avant-garde practices and as a component of narrative films.” Consider Busby Berkeley’s kaleidoscopic dance sequences, Len Lye’s painted films, the Broadway Ballet sequence in Singin’ in the Rain (1952) … even the requisite explosions in your typical Hollywood blockbuster are as much (or more) about spectacle than storytelling. So for me, it’s a useful concept – and an applicable one to the visual feast of Rapsodia Satanica, a film which carefully avoids any hint of realism. The way to watch films like this is to enjoy them for what they are – in this case, a strange phantasmagoria from the past. Otherwise, you will end up disappointed like this IMDb reviewer, whose commentary proves that one person’s trash is another’s treasure.

Rapsodia Satanica is one of the heights of Italian aestheticism. It exists in a dreamlike world of melodrama, fueled by the dramatism and lyricism of Lyda Borelli’s acting. The director, Nino Oxilia, died young in WWI. One of the key diva directors of the mid-teens, one must regret that we do not know what he would have gone on to do. And special mention must be given to the incredible beauty of the film’s colours: it is tinted and toned throughout, also featuring stencil colouring in many scenes.

A reminder of the ephemerality of beauty …

And the ending? Well, the devil must have his due …

Advertising for the film makes mention of Pietro Mascagni score, which fits beautifully with the film. On the copy of Rapsodia Satanica that I have, it is performed by the Staatsphilharmonie Rheinland-Pfalz.

Copious costume changes. Eleven by my count, or one outfit per four minutes, and they’re all stunners. A great deal of sheer silk is involved. 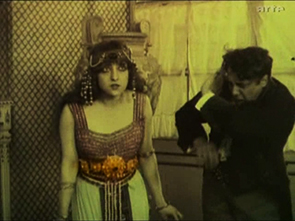 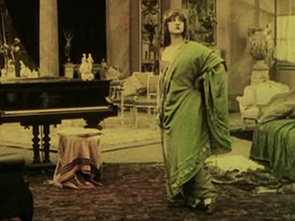 Mirrors! So many of them. Lady Alba looking into a hand mirror as an old woman, and then after she becomes youthful. Lyda admiring her reflection in a fountain. Distress as she sees a wrinkle on her face. Alba as she looks upon her reflection before veiling it … this reinforcement of themes such as beauty as artifice, doubled selves etc. is none too subtle.

Feminine sufferance. Being unconvincing old; faded beauty. Two brothers being in love with you, one of whom has read Romeo and Juliet a few too many times.

Alba has a confusing idea: the whole universe is love …

She veils her face, the priestess of love and death.

Unintentional comedy. Where will that Mephisto turn up next? Outside the window, behind a vase, busting a groove up a tree?

A notable scene involving flowers. The whole film is filled with them; a festival of flowers, boats decorated with them, vases of blooms used as mise en scène. Then there is this classic exchange:

However, the big floral moment comes later in the film. “Bring me the most beautiful flowers of the garden,” Alba commands. And she proceeds to scatter them on the ground:

An iconic piece of Borellismo that was used in both Diva Dolorosa and Gustav Deutsch’s Film Ist.

Ladies and gentlemen of the jury, I rest my case. Rapsodia Satanica is a beautiful and stylish film and quite probably the diva film par excellence.

Just in case you were wavering, here is, again, the painted scene used by Cineteca di Bologna as an opening sequence on their last couple of DVD releases.

Rapsodia Satanica [Satan’s Rhapsody]. Dir. Nino Oxilia. Roma, Italy: Cines, 1917. RS was filmed in 1915 but did not see release until 1917, so it has been attributed to both dates. I am greatly hoping that this will receive a DVD/BR release in the next years. The Cineteca Milano have made it available here on the European Film Gateway, without the accompaniment of the Mascagni score.

11 Responses to Death, love, and beauty: Lyda Borelli in Rapsodia Satanica (IT 1917)