Posted on 21 December 2014 by silentsplease 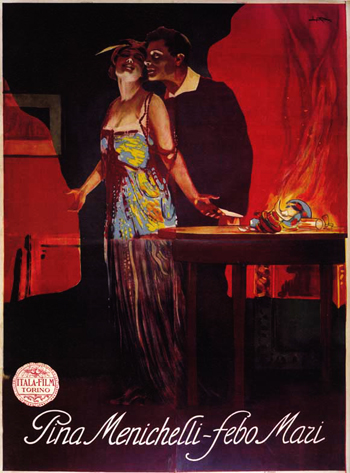 Il fuoco: la favilla, la vampa, la cenere. The fire: the spark, the flame, the ashes. Menichelli! Il fuoco was the film that established her as a major film diva, in which she plays the femme fatale par excellence. 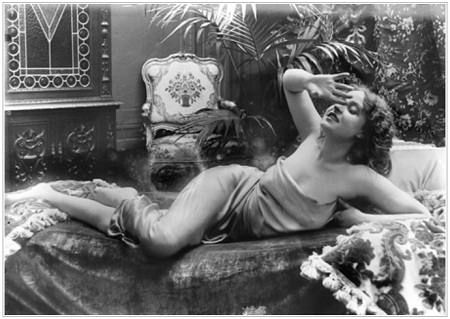 Like Rapsodia Satanica, Il fuoco is a film so atmospheric as to be surreal, representing the height of D’Annunzian decadence. It exists on the plane of myth and symbolism much more so than that of the real world: passion and mysterious caprice abound, buoyed by extended visual and narrative metaphors about fire and birds of prey.

Menichelli plays an unnamed poetess, who is also a duchess. At sunset one day, she meets an unknown painter (played by Febo Mari) in the countryside, both working on their art by a reedy riverbank. She approaches him, creeps up on him almost; he is instantly fascinated with this strange, bird-like, beautiful woman, wondering if he will see her again. When they encounter each other the next day, she wounds him when she pretends not to recognize him: “Stupid peasant! What’s wrong with you? Go away!” But among the reeds, he finds a poem inscribed on a sheet of paper that she has left. An omen, an invitation, and a promise … 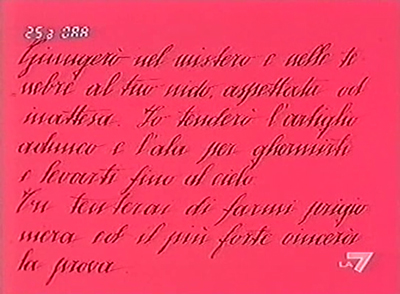 I will reach your nest secretly and in darkness – unexpected. I’ll stretch my hooked claws and wings to seize you, and you’ll be taken to the skies. You’ll try to imprison me, but only the stronger will be victorious.

That night she appears at the painter’s house. Already, there is worship in the way that he receives her.

“You live alone?” She asks. “There is no love in your nest?”  Love is like a flame, she tells him. She smashes his lamp: “See! Like the passion, its flame rises to the skies and flashes … but just for a moment. Choose!”

The option of choice is a false one; he is already hopelessly ensnared. He leaves his home in favour of the woman’s lair, the Owl Castle. She becomes his muse, posing for him in a painting that will make his name and achieve success and fame for him. But it ends as suddenly as it starts; we see the poetess receive a letter that her husband the Duke is soon to return home. She tells him: “Remember: the flame lasts only a moment and we’ve lived it.” The painter is as distraught as she is nonchalant:

And the owl flees her nest, leaving the painter to a now-empty castle. He is angry and saddened; he returns home, but his life and painting is disturbed, and her memory haunts his artwork.

The painter attends an elegant soirée, where he sees the object of his obsession. He runs to her, tries to talk to her, but she pretends not to know him. Mocking laughter is followed by a moment of thought, and perhaps, regret? The diva’s motives remain as opaque as ever.

As for the painter, his outburst gets him landed in an institution, mad, and … well:

In my diva intro post I mentioned that Pina Menichelli was my favourite diva, and there is an almost feral edge to her flamboyant elegance and posing in Il fuoco that I find fascinating. Like Borelli, she has a very stylized manner, always insisting on the primacy of the movements of her body, rather than acting in service to the story, as one sees with Bertini. Consider how she moves as she wraps her coat around herself: maximizing the screen space, drawing the eye to the fullest extent possible, emphasizing her clothing and gesture.

At other times, she conveys an amazing sense of joy and passion, as in this shot (which you might recognize from my banner image).

It’s a mesmerizing performance, is particularly apt for the luxurious, mythological symbolism of Il fuoco. Along with Malombra (1917), Il fuoco is one of films that best embodies the gothic edge of diva films to me. I also enjoy what an unapologetic character Menichelli plays – such a unrepentant femme character is unusual in this genre, and represents perhaps the closest that Italian diva cinema got to the Hollywood vamp archetype. As Linda Williams has said,

Pina Menichelli’s diva is pure, unadulterated femme fatale. Like most divas of the Italian cinema of this era, she moves sinuously and elegantly, giving herself more to the camera than to the man she seduces. But unlike many of the other divas, in this role she is untouched by fatal disease, uncanny apparitions, or even by a blemished reputation. For once, the woman is as much an artist as the man. She is a practiced predator. Her owl headgear, clenched teeth, and parted lips reveal an animalistic instinct to hunt, but not to devour her prey. Rather, her pleasure is to pounce on her little field mouse of a painter, toy with him, and then toss him away. After she orchestrates his creation of a masterpiece with her as its subject — a daring and kitsch nude portrait modeled on Cabanel’s The Birth of Venus — she will have no further use for him. 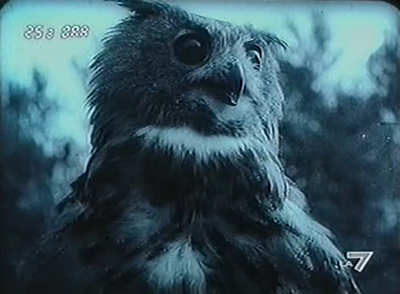 Interlude shots such as this reinforce the metaphor of woman as bird of prey.

Menichelli’s feminine excess was not universally appreciated: critic Nino Frank gave her the nickname “our lady of the spasms” for her screen acting techniques (which sounds like a compliment to me, but he probably did not mean it as such). Colette – incidentally, one of my favourite writers – also lampooned diva clichés and Il fuoco in particular in her 1918 magazine article “A Short Manual for the Aspiring Scenario Writer”:

Q: And between the apotheosis and the fall of the femme fatale, isn’t there room on the screen for numerous passionate gestures?

A: Numerous, to say the least. The two principal ones involve the hat and the rising gorge …. When the spectator sees the evil woman coiffing herself with a spread-winged owl … he knows just what she is capable of.

Il fuoco had a legendary director-cinematographer team in Giovanni Pastrone (La caduta di Troia, Cabiria) and Segundo de Chomón, best known for his wonderful trick films. The emphasis of the film is mood rather than plot; the camera lingers on the sumptuous costumes and settings. There are, however, several dolly shots, which one would expect from the director of Cabiria,.

The tinting and toning is wonderful throughout, enriching the atmosphere. As an aside, there are a couple of instances where the tinting changes mid-shot indicating different lighting: in the fire shot above; and prior to that, when the painter lights the lamp in the first place. A small thing, but I always enjoy these shots.

Though atypical, Il fuoco is an important diva film. Let’s see how it stacks up in the main categories …

Copious costume changes. Pina wears relatively few outfits in this film; 6 or 7, I think, or roughly one per 7-8 minutes. But what she lacks in quantity, she makes up in quality: her outfits are incredible. 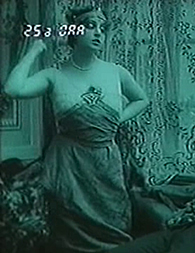 Hats that border on the avant-garde. Pina’s headwear is generally strong, but it is an objective fact that Il fuoco features the most important, greatest head adornment in history: the owl headdress.

It’s the best thing that I’ve ever seen. 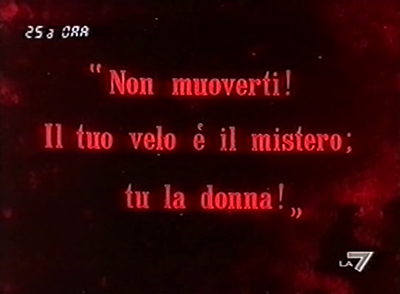 Symbolic naming. Although Febo Mari’s character is named in the film as Mario Alberti, Pina Menichelli is known only as Lei (her). He is but a man; she is an elemental feminine force, outside nature and language …

A dramatic scene involving a mirror. Strangely, none, perhaps because the idea of multiple identities and mirrored selves is represented through Alberti’s painting of the poetess.

A pivotal scene involving flowers. When the poetess and the painter meet again in her castle (The Owl Nest), he rains flowers over her:

Feminine sufferance. None for Pina! In Il fuoco it is the painter Alberti who must suffer, preyed upon by Menichelli’s character.

Incredible intertitles. This film rivals Rapsodia Satanica in its use of the written word. The poem has already been covered above, but there is far more where that came from. Consider this sequence:

“Love, as you know, is like this lamp. It gives out a little light to a bit of space and lasts one whole night …”

“See! Like the passion, its flame rises to the skies and flashes … but just for a moment. Choose!”

The flame metaphor is reinforced throughout: 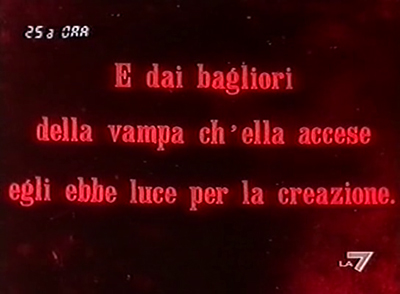 And from the sparks of the flame that she aroused he got the light for his creation.

And one final one that I liked just for its simplicity:

In conclusion: I love Pina Menichelli, and I love Il fuoco. A stunning film, with overarching metaphors about the femme fatale as bird of prey, the power and transcience of fire/love, and feminine influence on the artistic process. It’s a resplendent, surreal film with the magnetic presence of la divina Pina … and an ending that involves not the sufferance of a diva, but instead the male lead being reduced to a life of sad male angst owl origami, something that will never not be funny.