Posted on 10 March 2015 by silentsplease

Vera Karalli plays Lili, a woman blind since birth, who spends her time playing the violin, tending to flowers, and reading books in Braille. A friend of the family, Vadim (Polonsky) has fallen in love with Lili, and hopes to gain her an operation to restore her sight. She returns his feelings – when Vadim comes to see her, her happiness is tangible, her face lights up.

But Vadim has a shiftless brother called Georgiy, prone to drinking, partying, and running up debts. Lili is also acquainted with Georgiy, but she is not such a fan of him as he is of her; she twists away when he tries to kiss her. 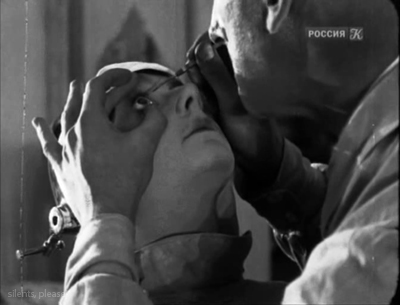 Vadim and Lili’s mother manage to find the money for the operation, and it is successful. Lili’s world has been music, flowers, and books, but now she is seeing for the first time.

Unfortunately, what she sees for the first time is … Georgiy. Yes – she mistakes Georgiy for her love, Vadim. And because they are worried about her fragile state of mind and her health, no one corrects her wrong assumption! It gets worse – Georgiy-as-Vadim and Lili are arranged to be married. It’s not long before the wedding when Lili finds out about Georgiy’s girlfriend/lover Sabina, who has been introduced to the audience in the film’s B-plot. Shocked by the discovery, Lili collapses.

The next morning, Lili wakes up to find that her blindness has returned. The film ends with Vadim returning to Lili, looking after her, and the two of them regaining their happiness.

Actually, that shot is from earlier in the film. Here is the actual ending shot, preceded by the intertitle “Finally Lili has found happiness.” 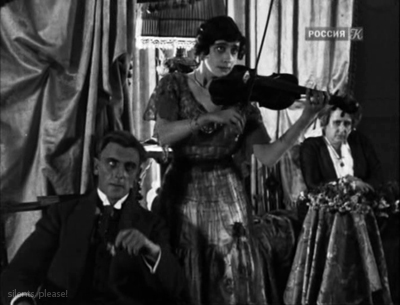 The joy is palpable.

It is, without question, a ridiculous plot. Why could Lili no longer tell apart the voices of the two brothers? Why would Vadim and Lili’s mother go along with a plan to marry her off to an idiot like Georgiy, a thing that would surely be more upsetting to her mental health than telling her the truth? There are plotholes on every level, something that did not escape reviewers of the time: the Театральная газета | Theatre Gazette criticized the film for its lack of originality, considering the material akin to that of second-rate theatre; that’s not at all an unfair criticism.

But yet, I find it a really beautiful film. Bauer’s sure direction, as well as good actors, elevate it beyond mediocrity. Elegant is the word most used to describe the oeuvre of Bauer, who is certainly one of the major directing talents of the silent era. He instinctively grasped the techniques and possibilities of cinematic language, combining skilful staging with fluid editing and medium close-ups. His films are beautifully lit, choreography, and photographed, and seem fresh and coherent today due to his apparently effortless adoption of the principles of film storytelling.

In general, it’s a strong cast. Karalli is an actress that fascinates me; she is so, so, beautiful, with wonderfully expressive eyes. While Eternal Night showcases her tragedienne side, she also has moments of coquettishness, like here:

Karalli is both stylized and realistic in this film; she breathes life into a role that is more of a trope than a character, although like the reviewer in Theatrical Gazette, I’m not convinced that her depiction of a blind person is true to life (the reviewer did, however, concede that “in everything else she was graceful and very familiar”). As Vadim, Polonsky brings his usual restrained intensity. Again from the Theatrical Gazette review: “his expressive face and restrained gestures made his acting pleasing to the eye, although unfortunately for him the role was ridiculous.” Heh. Incidentally, Lili’s mother is played by Olga Rakhmanova, who also played one of the best mother roles of the cinema in the Vera Kholodnaya vehicle Жизнь за жизнь | A Life for a Life (RU 1916).

But what are we to draw from the character of Lili? Back in my post on After Death, I talked about the fragility of femininity as a recurrent motif in Bauer’s oeuvre, or at least, in the films for which he is now most well-known. The plot and the very title of The Happiness of Eternal Night suggest that Lili can only be spiritually whole when she lacks her vision; but then again, the threat to her happiness comes from the dishonesty of others rather than her own actions. Is this a kind of narrative punishment for her newfound agency; an expression of the idea that with a disability comes a special kind of purity; or a demonstration of the (figurative) blindness of others? It is not made clear whether the deception is explained to her at the end – who is she in love with when we see her happy with Vadim? Eternal Night is perhaps one of Bauer’s more slight offerings, but an interesting film nonetheless.

This is my contribution to the Russia in Classic Film blogathon, organized by Fritzi at Movies Silently. Read the other posts here!

Счастье вечной ночи [Schastye vechnoi nochi; The Happiness of Eternal Night]. Dir. Yevgeny Bauer. Moscow, Russian Empire: Khanzhonkov, 1915. The film survives without intertitles, and excerpts from the script have been added in to clarify the action.