Posted on 4 July 2015 by silentsplease

Are you at Il Cinema Ritrovato in Bologna right now? The festival features the new restoration of one of my true loves, Rapsodia Satanica; the Keaton project; several other diva films; Gaumont at 120; the Technicolor section; and so much more … Sadly, I am not there to enjoy these film treasures, so I’m living vicariously (and rather enviously) through everyone’s Facebook pictures.1 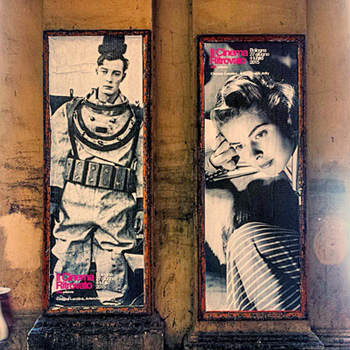 One of the centrepieces of Il Cinema Ritrovato is Francesca Bertini and Gustavo Serena’s Assunta Spina (1915), the DVD release of which is being launched at the festival. I hadn’t expected Assunta Spina to get the 2015 Cineteca di Bologna release, given that the title has long been quite widely available, and that last year’s release was a Bertini film.2 Still, the more Bertini the better, obviously, and I’ll certainly be buying a copy! The time, therefore, is ripe to take a brief look at Assunta Spina here at Silents, Please.

Bertini in the opening shot of the film.

Assunta Spina was a Neapolitan affair, adapted from the local-dialect play of the same name by Neapolitan intellectual and writer Salvatore Di Giacomo, and starring and directed by Gustavo Serena, a native of Napoli, and Francesca Bertini, who had spent much of her childhood there. The film had special resonance for Bertini, who had begun her career appearing in the play on stage as an extra. Now, in the lead role of the film, she would be dominant, both on screen and on the set of the film. Appearing in a realist film was a progressive choice at the time, and Salvatore Di Giacomo reportedly had such a high regard for Bertini that he gave her free reign to adapt his play to film, a challenge that she readily accepted. Although the film was nominally directed by Bertini’s frequent collaborator Gustavo Serena, Bertini played such a key role in the production that she can be considered co-director, as Serena himself attested:

And who could stop her? Bertini was so excited by the fact of playing the part of Assunta Spina that she had become a volcano of ideas, initiatives, suggestions. In true Neapolitan dialect, she organized, she commanded, moving the extras, the views, the angle of the camera; and if she was not convinced by a certain scene, she insisted on redoing it according to her views.

As well as a knowledge of what the role would mean for her career, Bertini therefore had a very strong identification with the work and its setting. And the film is decidedly Neapolitan, with many scenes shot on location in and around the Bay of Naples. The birthday picnic at Posillipo (above right shot) is one of the major set pieces of the film, but we are also treated to shots of Assunta moving about the canals of Naples.

The setting is key to the plot and to the character – no suffragette or modern woman, Bertini’s Assunta Spina is a Neapolitan laundress who suffers for the men in her life. That is not to say, though, that she is a one-dimensional character – Assunta is not so noble that she won’t flirt with Raffaele in front of her fiancé Michele, which spurs the already jealous and suspicious Michele to take tragic action. The plot is also complicated by Assunta’s development of genuine feelings for the court official with whom she becomes involved, for the sake of keeping Michele in Napoli. While ultimately Assunta Spina is a tragic role, she is also a character who displays a certain degree of agency, and whose strength, defiance, and sacrifice are realized well by Bertini.

Assunta Spina looms large in Bertini’s career. It was a critical and popular success that solidified her reputation as an actress; further, the film has been quite widely available over the years, and features prominently in the 1982 documentary The Last Diva (in which Bertini declares herself the true inventor of neorealism). Bertini’s performance is powerful, of course, but it was only on my recent rewatch that I truly appreciated the skillfulness of the film. Characteristic of the early-to-mid 1910s, Assunta Spina is much more reliant on storytelling/scene construction through staging than through editing, in what has been called the ‘tableau style’ of film-making. Assunta Spina features some very elegant examples of tableau staging – take for example the scene where Assunta arrives to her home, inside which Michele (Serena) is speaking with Assunta’s father. In the absence of dialogue or editing, the filmmakers must use composition and movement within the frame to keep our attention and further the story. Look at how depth and movement is exploited in this sequence, with the characters almost constantly in motion, activating and reactivating different areas of the shot. This series of images covers almost a minute of screen time:

It doesn’t look like much? Here’s a colour-coded version that I made, which makes it easier to see the way the characters exploit the full depth and width of the space, and unbalance/ rebalance the composition as they move. Note the way each character crosses the frame and back at different times, and how Papa Spina disappears or near-disappears in images 3 and 6 as the focus is firmly on Assunta and Michele’s conversation; he never comes forward of the midground. 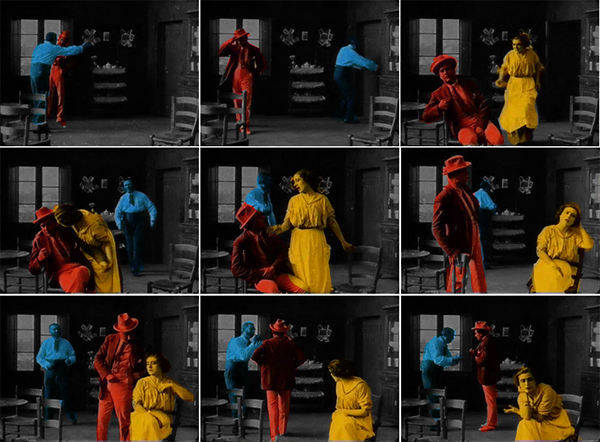 It’s a very nice piece of choreography and staging – clearly very precisely designed and shot, but without a trace of stiffness or hesitance. It would not be easy to do this well. I’ve seen people describe this approach to filmmaking as theatrical, but I think that’s a slightly misleading description – the single (and in this case fixed) POV of the camera allows staging and blocking choices that would not work when played in front of a theatre audience, with its spatial distribution. The careful – yet always fluid – choreography in this scene indicates that Serena and Bertini grasped the possibilities of the camera ‘eye’: this is not a filmed stage play, but a scene designed for the cinema.

Francesca Bertini is in full diva mode (suffering woman variant) as Assunta Spina, by which I mean that she commands the screen utterly. The standard of screen naturalism changes by the generation, but at the time this was a performance much more pitched to the rhythm of everyday life than that of Bertini’s screen contemporaries. All this is not to say that she doesn’t have her big dramatic moments – the right image below, of Bertini in the courtroom, is strikingly similar to one of Bertini’s poses the scene in Sangue Bleu where her character is separated from her beloved daughter.

The ill-fated birthday party; at the trial.

But these moments of high emotion are tempered with more casual ones, such as the dinner scene where Michele feeds Assunta from his knife, and the two continue to eat and drink even as they prepare to leave. It may not be obvious to modern audiences, but this was rather unrefined behaviour at the time, which serves to cement the working-class setting of Assunta Spina.

In a film which does not feature facial close-ups, it is with her body that Bertini must convey her thoughts and emotions to the audience. Bertini has the confidence and skill to pull this off, not an easy task given the range of the role. So while the power of her gaze plays a part, it’s mostly through body language and movement that Bertini brings the character of Assunta to life. Bertini also frequently uses props as well – her manipulation of the chair is important in this scene where Bertini is cutting a deal with court official Federigo Funelli.

Another prop that is evident in all the screenshots is Assunta’s shawl, a garment which I have read was more associated with Venezian culture, but which is used to great effect in Assunta Spina. Bertini draws it around her body; it swings around her and enlarges and intensifies her silhouette. Even when not explicitly in movement, it lends to her presence.

Defiance in the courtroom; sorrow at Michele’s jail cell.

The shot on the left there is possibly my favourite Bertini pose in the film – so regal.

The version of Assunta Spina I have seen is the 1993 restoration by the Cineteca Italiana (Milan), from a print preserved by the Cinemateca Brazilia (São Paulo). Presumably the new DVD release will use the Cineteca di Bologna’s print as a source; it will be great to see another version of this film available in DVD-quality. It’s an important performance by a powerful actress.

A tear in the film.

1. And rewatching Sherlock, Jr. with a bunch of my friends the other night, so it’s not all bad!

2. This means a Menichelli film next year, right?

1 Response to Cinema Ritrovato from afar: Bertini’s Assunta Spina (IT 1915)