Posted on 28 September 2015 by silentsplease

“The heart-rending story of a girl who weds for wealth, and finds that a palace of love is a gilded cage” is how Essanay advertized their 1915 release The Gilded Cage. This film, preserved by the National Film Preservation Foundation (US), caught my attention because of the participation of actress and director Ruth Stonehouse, who I recalled from her entry on the Woman Film Pioneers Project. 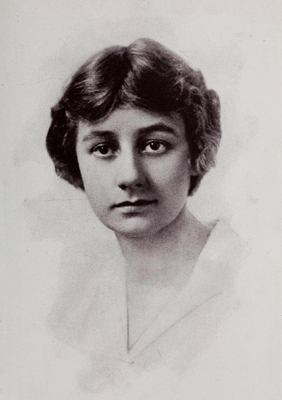 A veteran actress who appeared in hundreds of films, Stonehouse was also keenly interested in the production side of the industry. WFPP article author Michelle Koerner quotes a 1919 article in Motion Picture Magazine, in which Stonehouse states, “We-ll, of course I do want to be a star … for a while … but eventually I want to be a directress, a producer; I want to be in the business end of it, that is, at the same time, the artistic end of it”. In fact, she had already written and directed nine films, the 1917 comic short series the Mary Ann Kelly Stories, in which she also played the leading role.

“It’s no fun being a stepdaughter, mother” – Ruth Stonehouse as Marie.

The Gilded Cage is a simple film, telling the story of Marie (Stonehouse), the stepdaughter relegated to a servant-like role, and Eloise, the spoiled favourite. Eloise rejects her lover Kent in order to marry a wealthy man; Marie and the heartbroken Kent then get to know each other, eventually falling in love.

It’s a well-photographed film that is elevated by the nuance of its performances – Stonehouse does fine work as Marie, initially timorous, then joyous and even playful under the blush of love. The happiness of Marie and Kent is contrasted with the regrets of Eloise, who could easily have been portrayed as more shallow or vengeful; it is to the film’s credit that she is not a simple villain. Indeed, from a modern-day perspective, Eloise’s choice is entirely rational in an era in which women generally did not have a lot of options or enjoy economic independence, and she looks genuinely sad and conflicted about breaking things off with her lover. For a short film with an obvious message (money != happiness), it is really rather humanistic.

There were two particular shots in The Gilded Cage that spurred me to write up this post. The first is the shot below, where Eloise watches Marie and Kent in a tender moment – a striking composition, and an interesting example of female voyeurism.

Secondly, the final shot of The Gilded Cage, from which the film earns its title. After Eloise mournfully contemplates a bird in a cage (yes, that old chestnut), she buries her head in her hands, and we get the following dissolve:

SYMBOLISM! It’s the opposite of subtle, but undeniably effective, and a pretty cool mid-teens optical effect.

Research into The Gilded Cage is confounded by the fact that 1916 saw the release of a higher-profile Alice Brady film of the same title, although one can find some references to the Stonehouse film on the Media History Digital Library. Since the surviving copy of The Gilded Cage was found in New Zealand, a search of digitized newspaper collection Papers Past reveals that the film was shown across the nation in the last quarter of 1915, as a sideshow to Chaplin’s The Bank. Newspaper mentions of the film were positive: “a drama of merit” (Star, 05 Nov 1915); a “warm, human drama” (Observer, 27 Nov 1915); here’s an advert from the Evening Star (Otago) of 13 November 1915:

Ruth Stonehouse was born on September 28th, 1892, making this the 123th anniversary of her birth. She retired from motion pictures in 1928 and thereafter devoted herself to gardening, cooking, and charity work; per Wikipedia, she prepared “culinary masterpieces which her friends deemed superior to most chefs”. I wonder if she dreamed that people would watch her films 100 years on.

The Gilded Cage. Dir. not stated. Chicago: Essanay, 1915. Available to watch here on the NFPF website.

This entry was posted in Film and tagged cinema of 1915, cinema of the US, female director, NFPF, Ruth Stonehouse. Bookmark the permalink.