The fallibility of film history: Valeria Creti unmasked as Filibus

I wrote about the delightful 1915 action caper Filibus a few years ago: a wonderful gender-bending tale of intrigue and adventure, one of my favourite silents. In particular, I praised the performance of Cristina Ruspoli as the title character Filibus, and her alter egos the Baroness de Croixmonde and the Count de la Brive.

“Who is Filibus? What is she doing?” asked contemporary adverts for the film. This question now takes on a deeper meaning: recent research by Milestone Films in preparation for their release of the restoration has revealed that the title character was not, in fact, played by Ruspoli—she is instead portrayed by Valeria Creti. 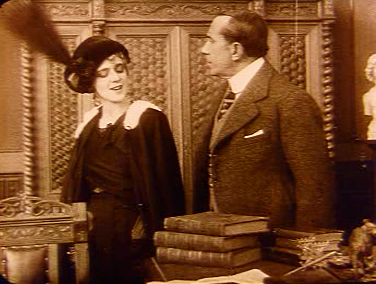 On reflection, I’m not really surprised about this. While I hadn’t actively given thought to the matter, I’d vaguely noted a difference in appearance between Filibus and Cristina Ruspoli as she appears elsewhere. Ruspoli is a hazy figure in film history, but I’d previously come across a couple of pictures of her, including the below portrait of Ruspoli from a contemporary film magazine: not a strong resemblance to Filibus, but the quality and angle of the photograph makes it hard to gauge.

Once you start to consider that Ruspoli is not in fact the lead actress, though, it’s trivially easy to clear things up. A quick search of the Museo Nazionale del Cinema’s collections brings up these portraits of Ruspoli: clearly not Filibus herself. 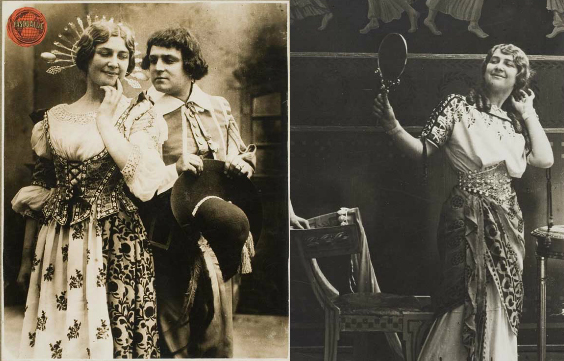 As Lucia in I promessi sposi; as Jone in Jone o Gli ultimi giorni di Pompei (both 1913)

Additionally, Ruspoli played the lead in Il supplizio dei leoni (The Torment of the Lions, Pasquali 1914)—good reminder for me to actually watch this—here’s a shot of her from that film.

As for Filibus herself—what actress commonly worked for Corona-Film in that time period? Valeria Creti. As above for Ruspoli, looking up Creti’s name in the MNC’s collections brings up this photo from her 1915 film Il castello del ragno (The Spider’s Castle): a slightly strange angle, but it’s easy to see that here we have Filibus. And we can also ascertain that Filibus is Creti from other sources, of which more below.

So, how did this error in attribution happen? In this case, it’s a decades-long mistake: Ruspoli is credited as Filibus in all of the sources that I’ve seen, including the Martinelli filmography—which is not without errors or omissions, but is generally considered a pretty definitive source. Even the MNC’s listing for Filibus lists Ruspoli’s name, but not Creti’s. Contemporary adverts for the film don’t mention the cast. Ruspoli, having acted in big productions for a major studio, would have been the better-known actress at the time, so perhaps film historians past simply assumed that she played the main role.

It does seem bizarre that no one has corrected this error before, but it’s also understandable that people took decades of scholarship at face value. And of course, once an error like this is published, it’s near-impossible to dislodge. For example, you see everywhere that Asta Nielsen played the role of Mata Hari, in a film of the same title (or possibly called Die spionin, etc). She didn’t—although as Ivo Blom has detailed, she did play a Mata Hari-esque role in Die Tänzerin Navarro (Navarro the Dancer, 1922), which is most likely where the Asta-as-Mata Hari idea came from. (I’ve traced mentions of Asta’s Mata Hari movie back to books from the early 1970s—if not earlier: the ground zero for this myth is unknown—and so, no matter how many times I submit corrections to IMDb, the Mata Hari listings stick around). Another example: Greta Garbo and Marlene Dietrich didn’t have an affair while filming Die freudlose Gasse (The Joyless Street, DE 1925) together: they could not have done, simply because Dietrich does not appear in that film. We all might wish for them to have found some joy together on that miserable street, but this affair was made up from whole cloth by Diana McLellan.

Back to Filibus and its actresses: Ruspoli does appear in the film, but in the supporting role of Leonora, with whom Filibus flirts in her male guise. Here’s a shot of them on their date together (with Creti in her ‘Count de la Brive’ guise): 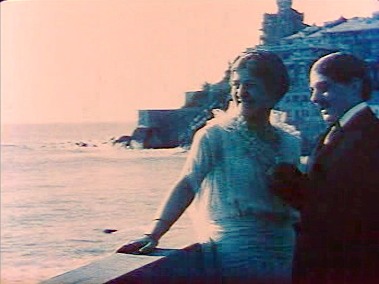 The flirtation they have is charming, and the two actresses have chemistry: a shame that this was their only collaboration.

Who were Ruspoli and Creti?

Little is known about either actress; they’re both minor figures in Italian silent film history. Both worked in the Torinese film industry, primarily in the early- to mid-teens, with Creti’s career having a longer tail than Ruspoli’s.

Ruspoli had probably the bigger career, with main roles in several of the early-teens wave historical epics produced by Pasquali: Spartaco (Spartacus, 1913), Jone ovvero gli ultimi giorni di Pompei (The Last Days of Pompeii, 1913; not to be confused with the more famous 1913 adaptation starring Fernanda Negri-Pouget), Salambò (Salambo, a $100,000 Spectacle, 1914). She also starred as Lucia in Pasquali’s 1913 adaptation of I promessi sposi (not to be confused with the other 1913 adaptation by Ambrosio, starring Gigetta Morano). Ruspoli appeared in over 20 films for Pasquali and over 10 for Savoia, with a handful of additional credits for smaller/independent studios.

According to Dennis Doros of Milestone films, Creti (née Peretti) entered films with her husband Vasco, whose sister was actress Amelia Chellini. (Side note: Vasco Creti had a quite long career in films, appearing in important films like Blasetti’s Sole! [1929] and the 1926 version of Gli ultimi giorni di Pompei. He also appears in Il fauno [The Faun, 1917], his first of two collaborations with Febo Mari).

Valeria Creti worked at Savoia in the same time as Ruspoli, but the bulk of Creti’s work was for Corona-Film, the studio that made Filibus. Corona-Film was also based in Torino, making films that were “for the most part adventure and small time features interpreted by second-rate actors,” (Cinema Ritrovato programme, 1997). Sample titles include Il ritorno del pirata (The return of the pirate, 1914), Il delitto del lago (The Crime of the Lake, 1915), and Il giustiziere invisibile (The invisible executioner, 1916), all of which starred Creti. Like many Italian film companies of the era, Corona-Film was short-lived, existing for the boom years of Italian silent film production and tailing off during the war.

At Corona, Creti worked often with Mario Roncoroni, the director of Filibus, and also with the director Giuseppe Giusti, director of Signori giurati … (1916). Now, this is where I have to hang my head, because I have seen Filibus several times and Signori more than once—putting me in what must be a very small club!—and have even written about both for this site. Now that I look again, I can easily see that the character of Hélène (Creti) is the same actress who plays Filibus. 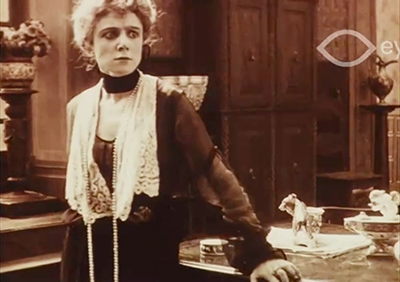 In retrospect, I feel unobservant and even surprised at myself for not making the connection. Then again, I watched the films months or years apart, and I wasn’t looking for it; also, it’s a very different role than those Creti plays in Filibus—as Hélène she brings an entirely different energy, and indeed hairstyle. In Signori it’s easy to be distracted by the beautiful tinting and toning, plus Fabienne Fabrèges’ drug-den/femme fatale shenanigans … plus at this point, a lot of actors in Italian films from this era have ‘that vaguely familiar look’ to me. Or perhaps the true answer lies in one of the charms of Filibus herself … the chameleon-like ability of Creti to embody different characters and disguises. 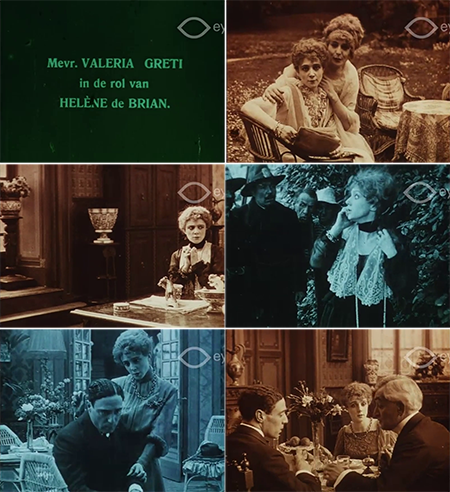 As I noted in my original review, it’s a good performance by Creti in Signori. I’d absolutely love to see some of her other work in Giusti’s films, given the quality of his direction in Signori. Unfortunately, little of Creti’s filmography survives; apart from Filibus and Signori, La sorella del forzato (The Slave’s Daughter, Corona-Film 1916) is known to be extant, but it’s not readily available for home viewing.

Creti pulled off a disappearing act worthy of Filibus herself, but after many years in the wilderness, it’s wonderful to see a fine actress get her due. Thanks to the people at Milestone, EYE and elsewhere who worked to restore her from obscurity! Look out for Milestone’s release, which promises an image quality astronomically better than has previously been available. 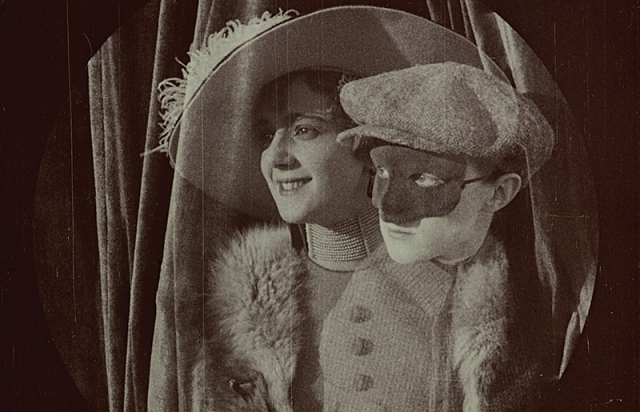 Look at the pixels on her!

Filibus recently screened at the Women and the Silent Screen/EYE International Conference 2019. My pal Hanna over at Thick Thighs and Bad Guys has a writeup here, go and take a look!

16 Responses to The fallibility of film history: Valeria Creti unmasked as Filibus