Posted on 11 November 2014 by silentsplease

A Soviet girl dreams of Hollywood in the charming short combined live action/animated film Одна из Многих | One of Many (USSR 1927). Like Потцелй Мери Пикфорд | A Kiss for Mary Pickford, also 1927, One of Many takes its cue from Mary Pickford and Douglas Fairbanks’ visit to Russia in 1926. The story follows a film-obsessed young girl (played by Aleksandra Kudriavtseva) who arrives home, still dizzy with excitement.

Because today was the day that she saw … Mary and Doug!

And not only that, but: “Mary SAW ME!” The inserted newsreel footage is cut so as to give the illusion of a special moment of eye contact between her and Mary & Doug.

Her joy is palpable. “She’ll take me to – AMERICA!” And when the girl lies down to take a rest, she is transformed into a cartoon character – and the film enters an animated Hollywood dreamland.

She awakes on Hollywood Boulevard, lit by signs and with a background graphic that sort of recalls the Moloch set from Metropolis. However, it’s most likely a reference to Intolerance, given that next up she meets none other than:

D. W. Griffith! Here described in an intertitle as the “Hollywood Bolshevik” … well, that’s one way of looking at him, I guess. From there, she meets Chaplin on the street – he’s mean to her and so she gets upset, but luckily Pat & Patachon (Karl Schenstrøm & Harald Madsen) are there to help her out. 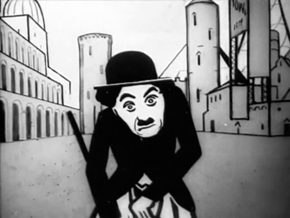 Pat und Patachon (originally Fy og Bi in their native Danish) are forerunners of Laurel and Hardy, in that they’re a screen comic duo made up of one tall skinny man and one short fat man. I’ve not been highly enthused about what I’ve seen of them, but they were very popular in Europe in their time. Really, their inclusion in this film is a bit surprising, as they never worked in Hollywood – but let’s not quibble. Pat and Patachon form a human horse to transport our heroine – all the better from which to spy Harold Lloyd’s motoring mishaps!

Skyscraper hi-jinks ensue before the girl is plucked from the sky by a dinosaur and completes the holy trinity of silent comedians by meeting the dino’s master: Buster Keaton, clothed in his caveman outfit from The Three Ages (1923).

In contrast to her European compatriats Pat und Patachon, Hollywood comedians are nothing but trouble in this film. Buster drags her off by her hair and then lets her get snatched by a bandit who puts the girl in a vice and squishes her flat as a pancake. It’s cowboy star Tom Mix who comes to her rescue this time:

The films dénouement, of course, involves Doug and Mary. Well, mostly Doug; my guess is that the writers/animators had trouble finding good caricature material for Mary. So we get Doug à la The Thief of Baghdad:

And The Gaucho Doug!

Needless to say, Doug saves the day. The girl wakes to see all of her movie portraits making faces at her from the wall …

One of Many was made at the famous Mezhrabpom-Rus studio in Moscow, directed by Nikolai Khodatayev, working with a mostly female team. I find the animation style very appealing – not polished, sure, but that adds to the charm. And as a device for looking at the difference between dreams, reality, and the movie screen, the combination of live action and animation is very successful. I first saw this film when it screened at the 2013 Giornate del Cinema Muto in Pordenone; I immediately thought of Sherlock, Jr. (1924; one of my all-time favourites), and indeed in the catalogue notes Sergei Kaptarev cites Keaton’s film, released in Russia as Одержимый | The Obsessed, as a possible reference. 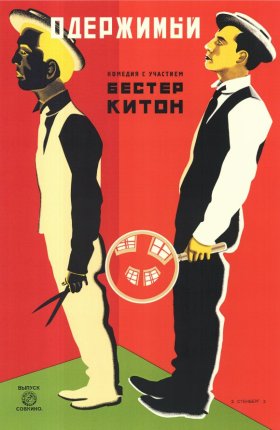 The film needs to be seen in the context of the Soviet Union’s New Economic Policy (NEP; 1921-28). Relative to the first years of the USSR (and of course, the Stalin era following it), the NEP was a period of greater economic and cultural freedom. That is not to say that it paralleled Western culture; in her article The Dance Class or the Working Class: The Soviet Modern Girl, Anne E. Gorsuch notes that the main sources of cultural transmission in the USSR differed from those in capitalist countries, with advertising, commerce, and the mass media functioning differently therein compared to in many other locales. Movies were a key source of international cultural information; between 1921 and 1931, the Soviet Union imported about 1700 American, German, and French films. Not surprisingly given the content of One of Many, Gorsuch cites Pickford, Fairbanks, Lloyd and Chaplin as the audience favourites.

Gorsuch’s focus is on the ‘Modern Girl’ figure: a new type of woman that emerged as a distinct phenomenon in the 1920s, known variously as flappers, garçonnes, neue Frauen, modeng xiaojie, etc. The student character in One of Many could be seen as an example of a Soviet Modern Girl; vivacious, flapperishly dressed, American-movie-obsessed … far from the more sober general ideal of the Komsomol, some of whose members considered a femme appearance to be unrevolutionary (though others embraced, or at least tolerated, American fashions in dancing, music, and clothing). Fashion as a powerful force for personal expression and creativity, or a capitalist diversion from true female liberation? An open question …

One of Many is a fun look at Hollywood through the Soviet lens. As an intertitle asks: “HAVE YOU EVER SEEN ANYTHING LIKE IT?!.”