Posted on 10 August 2015 by silentsplease 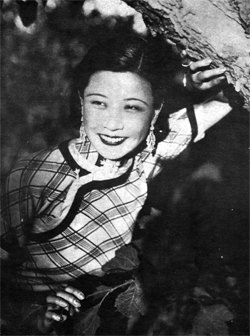 I’ll be in China in less than a week! So this seems like an appropriate time to take a look at another Chinese film from Shanghai’s golden era: 1935’s 新女性 | New Women, starring Ruan Lingyu in a heart-breaking role.

Ruan was one of the greatest actresses of the silent screen. She is best remembered now for her astonishing performance in 神女 | The Goddess (1934), to which she brought a power, intelligence and sincerity that belied her young age. Her considerable talents are also in evidence in New Women, where she plays Wei Ming, a music teacher and up-and-coming writer who struggles for independence, only to be punished by society.

This is a film that doesn’t pull its punches: New Women is an unflinching look at the societal restrictions placed on women in this era. The theme of male objectification is front and centre – the film is virtually a catalogue of how Wei Ming is seen as an object for consumption, not a person, by the men (and indeed sometimes the women) around her. The way New Women interrogates the consequences of patriarchy is still striking today, and it’s important to note that there are no cartoonish villains, just the casual cruelty of society and male entitlement. The plot is outlined in full here, but for some examples of the trials Wei Ming undergoes: Wei Ming pays a heavy cost for rejecting the advances of Dr. Wang, who arranges to have her fired from her job, and then offers to ‘help’ her by making her his mistress. We find out that Wei Ming was only published because, as an attractive women, the publisher thought her marketable, but later in the film they want to wash their hands of her, scoffing at the idea that she is truly a “modern woman author”. When Wei Ming is ultimately forced into prostitution to provide for herself and buy medicine for her (illegitimate) daughter, she is initially shocked by the idea: “What! You want me to sell myself! Only slaves sell their bodies!” The Madam counters, “That’s reasonable. But if we women want to make a little money in this world, what other path is open to us?” But as she comforts a distraught Wei Ming, the Madam grins over Wei’s shoulder at her associate, knowing that she has successfully preyed upon Wei Ming’s desperation.

New Women is unequivocal in its denunciation of the restrictions and double standards placed upon women. And rather than a radical, Wei Ming is simply a woman who wants to be able to live her life with dignity and self-determination. She may express sentiments that seem rather bold for the 1930s – “Marriage! What can marriage give me? ‘Companion for life!’ Might as well call it ‘Slave for Life!’” – but ultimately, she is written to appeal to the audience’s sympathy. Wei is a good person who is not undone by her own actions, but by the judgment and ill-treatment of others – perhaps that in itself is radical enough, especially considering this is an eighty-year-old film.

The film is replete with visual symbols of Wei Ming’s entrapment: aside from the classic ‘woman/birdcage’ shot combo shown above, another salient reminder comes when Wei Ming watches a dance performance and imagines herself in the role of the chained woman.

Later, when Dr. Wang tries to make her his mistress; the characters for ‘PAWN’ are briefly superimposed over Wei Ming’s face. These choices may not be subtle, but they are effective, and there is visual elegance in the way that they’re done. New Woman was directed by Cai Chusheng (蔡楚生), probably best known for his previous film 漁光曲 or Song of the Fishermen (1934). Like Sun Yu in 体育皇后 | Queen of Sports (1934), Cai takes full advantage of the filmic possibilities available to him: we see lengthy sequences of inventive wipes and dissolves, artful superimpositions, interesting framing.

One of the most interesting special effects occurs in the flashback showing how Wei met Dr. Wang: travelling by car, Wei reminisces, and the window beside her face becomes a screen in which their backstory is shown. Given that the scene is basically unnecessary – it simply shows the two characters being introduced at a social function – it’s a very distinctive choice by Cai, all the more so because the flashback scene itself contains intertitles and a dissolve.

Why go to all this trouble, when the content of the scene could easily have been summarized in intertitle, or signalled via a dissolve or other indicator? It may have been simply due to a wish to exploit the technical possibilities of film – and Cai has a clear liking for optical effects – but I think there is also a thematic link here to New Woman‘s overall theme of objectification. It seems significant that the scene is not filmed from Wei’s point of view, as one might expect in a memory, but that we instead watch her watch herself, as if on screen.

Also tying into this idea is the below photo of Ruan Lingyu/Wei Ming, which is reused throughout New Woman. In a film that is all about how a woman is consumed by society and whose image is destroyed, it’s a fitting visual symbol.

Okay, I cheated a little with the last of the images, which actually shows a different photo, but the point stands. I included the newspaper shots deliberately, as the publishing subplot plays a large role in the climax of the film. When Wei Ming appeals to her publisher and a reporter for help, both make advances on her. This necessitates her turn to prostitution, and of course, her first customer is the seedy Dr. Wang … But the idea of selling herself to him is the one thing that Wei Ming cannot bear. With the help of her friend Li Aying, they throw him out … but Wang’s vindictiveness and entitlement apparently knows no bounds.  Talking to the reporter she rejected (who describes her as “totally unappreciative” [!] and is now fishing for dirt on her), Wang lets slip a few salient details. Already in despair about her future and feeling things closing in from all sides, Wei Ming takes sleeping pills, as all the while a newspaper scandal is born (“Secret History Revealed. Former Prostitute. Child Out of Wedlock.”), which only heightens once her suicide attempt becomes known (prompting ‘analyses’ that state “Suicide Cannot Be a Common Practice. Women Will Always Be the Weaker Ones”).

Her cruel denunciation in the media actually seems to give Wei Ming motivation to live – she crushes a newspaper in her hands and tells her companions that she wants revenge. But it’s too late for recovery.

Wei Ming is a tragic character, and one that could seem maudlin if the role wasn’t anchored by the skill and power of Ruan Lingyu’s performance. Unfortunately, New Women was a tragedy in more way than one. It is impossible to discuss the film without reference to Ruan Lingyu’s suicide, a horrific case of life imitating art which occurred shortly after the release of the film. (Ruan’s final film, 國風 | National Customs aka National Style, was released posthumously). Already a target of the Chinese gossip press and under a great deal of strain in her personal life, Ruan Lingyu was harrassed relentlessly by media in the wake of the film’s release, who were extremely displeased with their negative portrayal therein (and had in fact already forced extensive cuts to the film). These mounting burdens led her to take an overdose of barbiturates; like her fictional counterpart Wei Ming, the pressures around Ruan Lingyu consumed her. Even then, she might have survived, had her partner not stalled for hours before taking her to hospital, for fear of bad publicity.  One of her suicide notes reportedly contained a line that read, “Gossip is a fearful thing”. She was only 24. 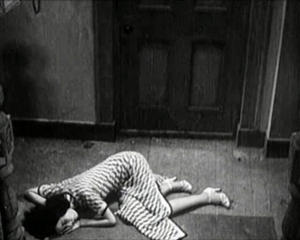 The power of Ruan Lingyu’s performance speaks for itself, but for obvious reasons, New Women is difficult to watch. And of course, there is a lot more that can be said about this film – I haven’t even touched on the other female characters that appear as other possible ‘new women’ archetypes, or the relationship to political thought of the time. It is tempting to see Wei Ming as a metaphor for the time: an emblem of a society striving for the future, but not yet quite able to overcome the present. In New Women, Wei Ming’s last words are, “I want to live!” What a terrible tragedy that Ruan Lingyu did not.