Hesperia! The diva as star attraction in Emilio Ghione’s Anime Buie (IT 1916)

Today marks the 99th anniversary of the première of Anime Buie | Dark Souls, fourth in a series of films featuring the character Za La Mort, an honourable French apache (street criminal gang member) and his adventures in the criminal underworld and beyond. The character was the brainchild of Emilio Ghione, who wrote and directed the decade-long series, as well as starring as Za. With his sharp cheekbones and sunken eyes, Ghione is one of the most distinctive looking actors of his time. 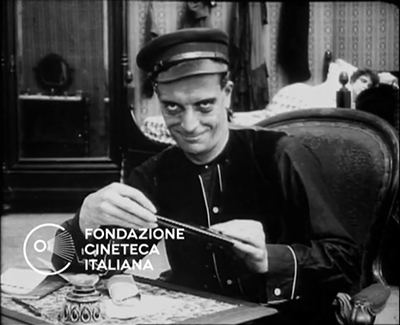 Ghione in episode 1 of I topi grigi. 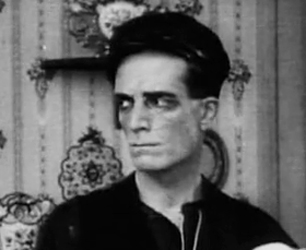 As a genre, the crime film saw a boom in the early teens, spurred on by sensational newspaper reportage of the Parisian criminal demi-monde, and the huge success of pulp crime fiction such as the Nick Carter, Fantômas, and Zigomar stories. Les Vampires (FR 1915-16) is the most famous example of a film serial about an apache gang; in Italian film, Ghione was the primary exponent of this French-born phenomenon. He produced sixteen Za La Mort films over the period 1914-1924, of which three were multiple-episode serials; a filmography for the Za La Mort series is available here.

Like that of his companion Za La Vie (Kally Sambucini, Ghione’s real-life partner), introduced in the series’ second installment Za La Mort (IT 1915), Za La Mort’s characterisation was somewhat unstable through the series, varying from a criminal to a honest man operating outside the law to a morally grey character. In Anime buie, apache (jump on it!) Za La Mort has just been released from jail after serving a two-year sentence, and two women wait for his release: Za La Vie (Sambucini) and Casque d’Or (Golden Helmet), played by Hesperia. 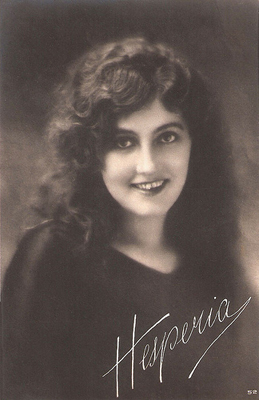 Although I enjoy Ghione, it was mainly Hesperia’s presence that led me to watch this film. Hesperia (née Olga Mambelli) began her career in theatre and the variety stage, and when she moved into films in 1913, she quickly became a popular cinema actress; in 1914, she was voted the most beautiful actress of the Italian screen. Today she is remembered principally (if at all) for her collaborations with her future husband Baldassarre Negroni, and the rival versions of Alexandre Dumas fils’ La dame aux camélias (La signora delle camelie) that she and Francesca Bertini released in 1915. She is a film diva of the teens that I’ve long been curious about, but had never had the chance to see in action before; while several of her films survive, Anime buie is, to the best of my knowledge, the only film of hers that is readily available for viewing.

The entrance of a diva.

And it is, indeed, her film: it quickly becomes clear that Anime buie is much more of a Hesperia film than a Ghione/Za La Mort one. As was the case with now-lost Nelly la gigolette (1914), the inaugural Za La Mort film starring Francesca Bertini, Anime buie is a film that foregrounds its female star, mingling the genre of the Italian diva film with that of the crime film. Anime buie is explicit about this approach: in a meta-cinematic turn, the diva Hesperia plays … the diva Hesperia, the persona adopted by Casque d’Or in America. We see Hesperia receiving flowers and adoration, enjoying her position as queen bee of high society, and being courted by four millionaires as she lies around smoking languidly. A major set-piece is her performance at the Tabarin-Majestic, where we see her dance (hilariously) and perform on stage as Mephistopheles.

If this wasn’t enough, in the opening to the second act, Casque d’Or is reintroduced as Hesperia via this shot:

Why yes, that is a flower arrangement spelling her name. It’s just the thing a lady needs to complement her leopard-skin rug!

But back to the story. As Za La Mort is freshly released from jail, Casque d’Or and Za La Mort’s companion Za La Vie (“the obstacle”, an intertitle tells us) are in an apache tavern. You might say that there is a certain hostility between the two women:

This series of shots was the moment my interest in the film really picked up. But the scene turns in a way I didn’t expect: as the two learn of Za La Mort’s release and imminent arrival (“Viva Za La Mort!”, a man announces via intertitle), the tension between Casque d’Or and Za La Vie erupts in spectacular fashion. The two women begin violently arguing, and Casque d’Or pulls a switchblade out of her garter.

Za La Vie hits the ground just before Za La Mort runs in, as a group of Italian policemen cycle to the scene incredibly leisurely. Finding Za La Mort standing over the body, he is thought responsible, despite Casque d’Or’s cool, remorseless confession that she knifed La Vie.

The plot then picks up several years later in America, with Casque d’Or now celebrated as star dancer/performer Hesperia. Za La Mort has assumed the identity of Gil Negro, a rich banker, but he is actually still a criminal, although the nature of his villainous endeavours was not really clear to me. At a banquet, he sees Hesperia and recognizes her as the now long-forgotten Casque d’Or; cue an awkward moment of identification:

Za can’t get her out of his head, and pursues her with passion: “Casque d’Or, Hesperia, angel or devil, you are my whole life …” Mixed in with all this are some criminal goings-on, for which Za ends up back behind bars. He fakes his death in prison by obtaining a drug that makes him appear dead, and then makes his way to Europe, where Hesperia is headlining a circus act and has been warned of his arrival by the prediction of a tarot reader. The circus is accidentally set ablaze, but Za La Mort arrives just in time to save Hesperia … and whisk her away to the future that every diva dreams of, a peaceful farming life out West. The final intertitle: “Maybe love can purify the souls that once were clouded by crime …”

Needless to say, the plot doesn’t make a lot of sense, and contemporaries criticized the film’s absurdity. A major sticking point is the treatment of Za La Vie: for someone who was supposedly in a partnership with her, Za La Mort not only seems markedly unconcerned by her death, but goes on to aggressively pursue her murderer on multiple continents. Hesperia is characterised as an irresistible femme fatale, still haunting Za years later (“I will breathe again only with your kisses!”, he exclaims at one point), and it seems that her real-life (and in-film) star power simply overwhelmed the narrative’s responsibility to Za La Vie. Still, these kind of plotholes are rather jarring, and the story and performances don’t do a great job of selling this scenario. From what I have read, these kind of illogicalities and confusions are relatively common in the Za La Mort series, with thrills taking precedence over narrative coherence.

All the same, it’s possible to pull off almost any ridiculousness as long as it’s done with panache, but as a piece of filmmaking I have to say that I found it on the clunky side. I’ve watched a couple of episodes of Za La Mort serial I topi grigi | The Grey Mice (IT 1918) and while not outstanding directorially, I remember those having a bit more visual flair and fluidity. (Of course, it doesn’t help that Anime buie is incomplete and in poor shape aesthetically). And while I didn’t really mind the confusing story, as plot isn’t my priority in film viewing, it may present a stumbling block to some people.

What of Hesperia’s performance? She’s definitely second-tier compared to Borelli, Bertini and Menichelli; to my eyes, Hesperia has nothing approaching their on-screen charisma or beauty. Then again, it’s hard not to appreciate this kind of emoting, which may be a good litmus test for if you should watch the film or not:

Hesperia as diva – the checklist

Given the centrality of Hesperia (and her star persona) to Anime buie, let’s have a look at how diva-rific it really is.

Copious costume changes. Hesperia appears in about 12 outfits, which is good for one every 4-5 minutes. Not only that, she gets a great diversity of outfits. Impressive! 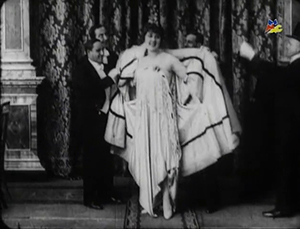 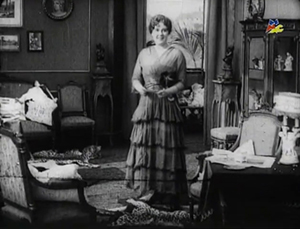 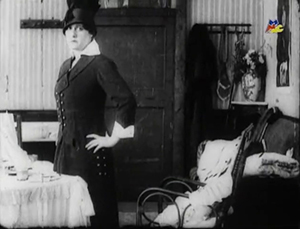 No Necklace of notable length, but check out the beading on her performance outfit (top right).

Headwear that borders on the avant-garde. Hesperia wears several fashionable feathered hats, and a great black single plume as Mephisto. And I’m not sure what she’s got on her head in the banquet scene, but I know that I like it. 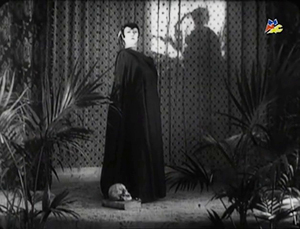 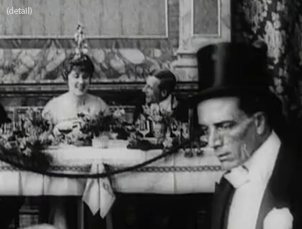 Symbolic naming. Film star Hesperia plays Casque d’Or, gangster’s associate based on real-life figure Amélie Élie (who as Casque d’Or was known as ‘Queen of the Apaches’) and is reborn as Hesperia, performing star.

“Is it you they call Hesperia, Casque d’Or?”

Mirrors. Not really, but we do get this moment when Za La Mort/Gil Negro looks at the hidden photo he has kept of his lost love: 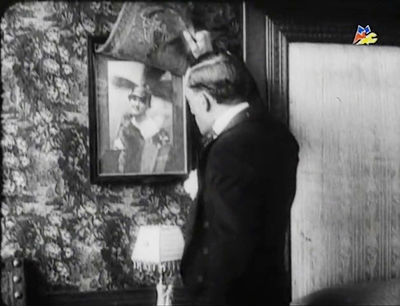 A dramatic scene involving flowers. Anime Buie sets a new high bar for this criterion. One of Hesperia’s admirers places an order for “the rarest flowers you can obtain … and the letters ‘HESPERIA’ should be clearly seen”. The flowers are presented with pomp and circumstance; we see a group of men march into the room bearing flower arrangements that spell out her name.

Hesperia looks like she’s having a ball, and why not? In fact, the audience has already seen this flower arrangement – as shown in the GIF further up the page, Hesperia poses with it in the opening to this section of the film, firmly establishing her as diva and star attraction.

Feminine sufferance. Strangely little. Casque d’Or gets off scot-free and has the world at her feet as Hesperia, Za escapes death and the police repeatedly, and everyone lives happily ever after! Well, except Za La Vie, but she turns up again in the other Za La Mort films, so it wasn’t a permanent death. I guess maybe Hesperia pines a little, when she’s not receiving flowers and admiration from a group of millionaires?

Ladies and gentlemen, the prosecution rests. Hesperia may be no Borelli, Menichelli or Bertini, but this is certainly a diva film.

The film as artefact

Anime buie survives in its Spanish-language release, Triptico de dos Almas (Triptych of Two Souls), a title that makes about as much sense as anything else about this film does. The surviving copy is a black and white positive of 1142m in length; around 20% of the original footage (1455m) is lost. Unfortunately, as seen above, this copy has severe quality issues; it is very high-contrast and on the dark side, with crushed blacks. At several points the frameline jumps.

Still, considering the poor survival rate of the Za La Mort films and the unavailability of the work of Hesperia, it’s fantastic that it’s out there. I can’t really recommend this to the casual viewer, but the way the film slips between Hesperia as character and Hesperia as star diva is something I found really interesting.

Anime Buie [Dark Souls]. Dir. Emilio Ghione. Rome, Italy: Tiber Film, 1916. The film is preserved by the Museo Nazionale del Cinema (Torino) and is available to view here on Vimeo; duration of 55:26. English subs exist but are not available on the linked video.

3 Responses to Hesperia! The diva as star attraction in Emilio Ghione’s Anime Buie (IT 1916)