Posted on 15 December 2014 by silentsplease

With the release of Sangue Bleu in 1914, reviews were glowing: “This splendid masterpiece is transfused by all of Ms. Bertini’s soul as an incomparable artist.” Francesca Bertini was already launched as a film star, and as a major production, Sangue Bleu helped solidify her fame (which would climb to greater heights the next year with the success of Assunta Spina). From 1912 to 1914, the Roman studio Celio-Film produced 25 films starring Bertini; Giovanni Lasi writes that Bertini was the “crown jewel” of the production company, prior to her move to Cesar-Film.

As I discussed here, on the continuum of diva acting styles Bertini fell on the realist end, opposite to Lyda Borelli’s luscious posing. Indeed, one only has to compare this film to Rapsodia Satanica, also directed by Nino Oxilia, to see how the director adapted his talents to the different characters of the two stars. Of Bertini, Francesco Pitassio writes, “What characterized her style was a marked economy of bodily gestures and of movements within each scene, as well as a greater reliance on her gaze.” Indeed, Bertini has a directness that one does not find among the other divas of this period, and her films are grounded in real-life situations to a greater extent than Borelli or Menichelli. 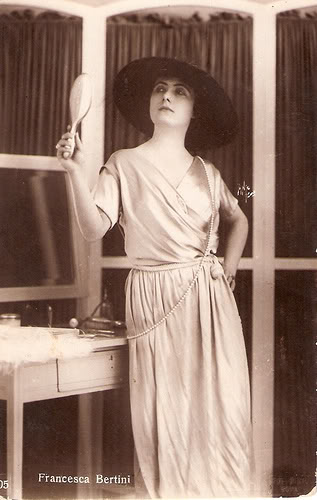 In Sangue Bleu, Bertini plays Princess Mira van Monte Cabello (original Italian: Elena di Montvallon), “a woman who, for her noble feelings and blue blood, will not be degraded by degradation,” according to the copy from the back of the DVD. Though undoubtedly a melodrama with Bertini at the centre, Sangue Bleu is much more plot-driven than either of the Lyda Borelli films I’ve written about. As Mariann Lewinsky writes in the DVD booklet, Bertini plays a noblewoman and mother who is betrayed, misjudged, exploited, blackmailed, and humiliated. The film opens with some tension between Princess Mira and her husband; an intertitle informs us that ‘The relationship between the prince and the princess has been shaken recently by Mira’s jealousy.’ At a soirée hosted by the couple, Mira is snubbed by the Countess de la Croix, who pays a little too much attention to the Prince.

Seeing the duo’s interactions at the party, Mira’s jealousy grows, and with good reason – they certainly aren’t being discreet about the affair. Shortly after, Prince Egon asks her for a divorce: ‘Last night’s scene has convinced me that living together has become impossible. I propose that we seek a divorce by mutual consent.’ Unless there is missing footage of Mira and the Countess throwing down, surely the Prince and the Countess were the ones creating the scene … but with no other options, Mira agrees, as long as she keeps custody of her daughter Liane.

Pensive Mira, after the party; stunning use of light and shadow.

Mira performs a scene from Madame Butterfly for a charity benefit, directed by actor Jacques Wilson. Wilson finds out by telegram that his mother is ill, and he doesn’t know how to reach her; Mira offers to take him in her motorcar. However, this is all part of a plot of the Countess de la Croix, who has arranged for private detectives to follow them and take pictures. 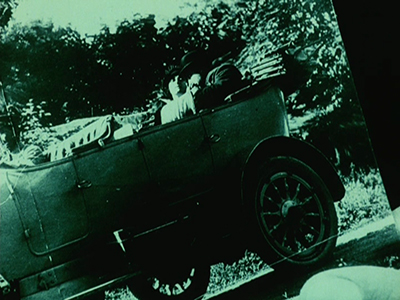 The pictures cause a scandal and ruin Mira’s reputation; they look innocuous to 21st century eyes, but one assumes that the suggestion of an affair (especially a cross-class one), or perhaps the simple act of spending time with a man unchaperoned was scandalous at the time – or at least in the world of the film. Mira loses custody of little Liane, who we had been told earlier was her only consolation in life.

A year later, Mira and Jacques are in Monte Carlo, where he has gambled away all of their money, even forcing her to sell her jewellery. She receives a letter from Liane, where the child tells her that the Countess is always angry with Liane, and that the child has been told that her mother is in heaven (!!) One wonders how/why Liane was posting the letter … but it’s even more tragedy for Mira, acted powerfully by Bertini. When Mira finds out that her daughter is in Cannes, she takes action to see her, but is overpowered by Jacques and the man to which he owes money; to meet his debts, he blackmails her and forces to dance in a music hall.

The ‘tango of death’ advertised on billboards, using an image of Bertini from L’amazzone mascherata. 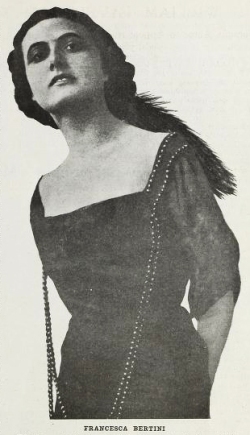 The performance is imminent; Mira writes a letter to the Prince, telling him that she will not compromise his name again, and imploring him to give her child the bracelet that Liane had previously given to her. And then, the dance. The tango scene was almost certainly inspired by Asta Nielsen’s gaucho dance in Afgrunden | The Abyss (DK 1910), a scene which has lost none of its erotic power 114 years later; Bertini herself admired Nielsen. Tango had recently been introduced to Italy, and was derided in the Catholic press as sinful and immoral; therefore, in the context of the times, the inclusion of a tango dance scene in Sangue Bleu can be seen as rather outré. Bertini smokes, insouciant in the manner of one who has nothing left to lose.

And the climax: Jacques rushes on stage with a knife; a scuffle ensues. In the words of Michele Canosa:

Mira leaves the make-believe scene behind, and stabs herself in the chest. That is what a lady is: sangue bleu. Here is what a diva is – an Italian one.

There is a coda to the story – Mira convalesces at the Prince’s home, her daughter running to her. The family hug tightly. ‘ Your child … Our child … She will not cry for her mother anymore.’

I would say that it’s an above-average melodrama, elevated by the performance of Francesca Bertini, who sells the tragic scenes as much as the lighter ones. Sangue Bleu is distinguished by her acting and its wonderful mise en scène, lighting, and framing. Ever-changing costumes, detailed below, are a feast for the eye, and it’s a well composed film, made spectacular through its bright tints and tones.

One particularly memorable scene sees Mira walking along the seashore at dusk, pursued by Jacques and the money lender. The beauty of the shot lies in its simplicity and striking use of contrast, and here the gothic edge of diva films is also apparent.

Let’s see how Sangue Bleu scores on the diva scale.

Copious costume changes. This is one category when Sangue Bleu really shines – I counted around 19, or one outfit per 3.7 minutes. Clothing plays a key role in setting mood; ensemble as plot device. Here are some of my favourites (click to view slideshow of larger images): 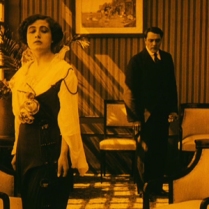 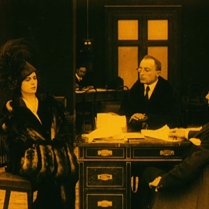 A special mention also to the woman on the right here. 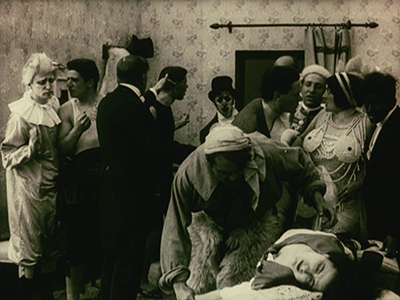 Hats that border on the avant-garde. Another category in which Sangue Bleu cleans up the competition. 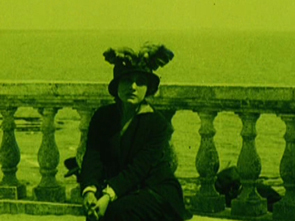 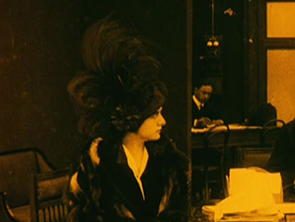 Special mention: in the Monte Carlo gambling scene, an extra is wearing an hat with two antennae topped with black pompoms.

Mirrors. Mirrors do not feature particularly in Sangue Bleu. However, it’s sitting at the mirror that Francesca Bertini acts her most painful scene, accepting that she won’t see her child again and writing the letter to the Prince, asking him to give her bracelet back to her daughter.

Symbolic naming. None in particular, but there’s something amusing about the name Jacques Wilson. Fun fact: cabello is Spanish for ‘hair’.

The Countess brandishes the incriminating photo.

A dramatic scene involving flowers. Interestingly, the role of expressive foliage is played by bamboo in Sangue Bleu. Bamboo provides the backdrop to several key moments, such as one of the scenes between the Countess and the Prince that fuels Mira’s jealousy.

Mira spies on her husband and the Countess.

Later in the film, when Jacques Wilson and his goons go after Mira, after creeping after her on the beach, it’s in the bamboo that they ambush her.

Restored and on DVD

Sangue Bleu was this year’s Cento anni fa (‘one hundred years ago’) release from the Cineteca di Bologna. The film survives in the legendary Desmet collection of EYE Film Instituut Nederland; an exhibition on this treasure trove, Jean Desmet’s Dream Factory, has just opened at the EYE cinémathèque building. (It goes without saying that I am incredibly sad to miss it!) The surviving copy was a tinted and toned 35mm nitrate print of 1308m, and the internegative created from that was the basis of this restoration/release. Since the original Italian version is lost, we cannot know if it differs from the Dutch release; the names of characters differ slightly.

As a bonus, the film includes the short comedy Kri Kri e il tango | Kri Kri and the Tango (IT 1913), starring Raymond Frau (pseudonym: Raymond Dandy). Along with André Deed (Cretinetti), Marcel Fabre (né Perez; Robinet), Ferdinando Guillaume (Tontolini, Polidor), Frau was one of the main actors working in comica, or the genre of Italian comedy shorts. Kri Kri e il tango is a madcap, slapstick take on the European tango craze of that era. 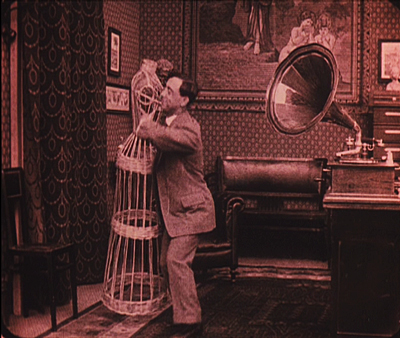 Before the ball, Kri Kri practices the tango.